Queers Against A Government of Oppression

At Nigah, we are dismayed by the impunity with which the Government of Orissa treats its citizens in the POSCO project-affected areas of Jagatsinghpur district. We strongly protest the violence unleashed against protesters, the systematic misuse of criminal law to register false cases against affected villagers, and the prioritizing of corporate interests over those of local residents.

The POSCO project has deliberately ignored legal and constitutional safeguards from the start, dealing both with the environment and land acquisition. In late 2005, the Government of Orissa signed a MoU with the Korean steel maker POSCO to build an integrated steel plant in Orissa. As part of the MoU the Orissa Government intended to acquire 4000 acres of land for the project site, and additionally 2000 acres of land for POSCO to develop a township. The MoU expired in 2011 and a new one is currently under negotiation. However, as of 2012, the government has acquired 2000 acres and is still forcibly trying to acquire 700 acres more, in the gram panchayats of Dhinkia, Gobindpur and Patana in Jagatsinghpur district. Meanwhile, the project’s environmental clearances stand suspended by the National Green Tribunal, because POSCO under-represented the environmental impact of the project to the Government of India.

The land that the Orissa Government is acquiring for POSCO is fertile land, which means that people live here and earn their income from farming it, or gathering forest produce from it. Beginning in 2005, the villagers who live here have strongly objected to the coerced land acquisition, and to loss of their capital assets and means of livelihood. Instead of engaging in democratic conversation with affected villagers, the government has been quashing dissent through violent, underhand and undemocratic means.

For example, earlier this March, women frantic to save their crops and prevent their land from being forcibly acquired stripped off some of their clothes in protest in Gobindpur village. The government’s reaction to this desperate action was heinous: it chose to try to delegitimise the protest by charging four of the protesters with indecency and obscenity. Furthermore, when goons acting on behalf of POSCO hurled a bomb in Patana village, killing three anti-POSCO activists, the Orissa Government charged that the bomb was created by the activists themselves, and significantly delayed medical attention to those injured.

The Orissa Government has destroyed the means of livelihood of the poorest villagers in Jagatsinghpur, by tearing down betel leaf plantations. It has falsely registered a large number of criminal cases in order to intimidate protesters and threatened to arrest them if they leave their villages. It has crippled health services, even in critical situations. The Orissa Police is biased, not protecting protestors and enabling their harassers. The Orissa Government has gone to the extent of terminating jobs of its employees who protest the land acquisition. The government hones in on the “indecency” of the poorest and most vulnerable populations of the state, and is utterly blind to the brazen indecency of displacement, coerced land acquisitions and silencing through intimidation that it perpetrates.

This is no different from what happened in Singur and Nandigram, West Bengal and what is happening in Kudankulam, Tamil Nadu. State governments have been shutting down dissent through intimidation and violence. The Orissa Government is following suit. This is an unacceptable trend in which state governments place the interest of corporate partnerships over those of their citizens, couching their actions in the Trojan horse language of ‘development’.

At Nigah, we stand for a politics that values equality and justice as its core. As queer people, we maintain that it is impossible to be queer by circumscribing our politics to LGBT rights alone, without turning our gaze to the wider world that also impacts us. We see struggles against widespread injustices on the bases of gender, sexuality, religion, caste, class, language and region, as interconnected with each other.

We demand the end of government-mandated violence in Orissa. Protesters follow democratic processes to register their opposition, and we demand that the Orissa Government – as an embodiment of democracy – do the same. We demand that it take seriously the legal and constitutional rights of its citizens and of the environment, and that it not surrender these to the interests of corporations.

Nigah is a queer collective based in Delhi.
More about us on our blog: http://nigahdelhi.blogspot.in/

Several recent events in India have made it evident that collectively we lack a language to understand those gender positions that do not fit neatly into male and female and that we participate in an active erasure of a range of practices of gender non-conformity from our public life. This gap has led to a very difficult social climate for people - transgender, Hijra or gender variant - who live out such identities on a daily basis and has led to reprehensible situations involving arrests, blackmail and assault. Such events are only the crisis points of an everyday struggle which is marked by a real circumscription that gender non-conforming people face economically and politically, whether at homes, workplaces or schools/colleges.

We propose a public discussion on this issue for which we have put together a panel of speakers.

DRAGGED AROUND THE WORLD

Visiting India on her Dragged Around the World tour all the way from the United Kingdom, Uma Gawd is a popular drag artist and a chanteuse. Once Uma steps into a room she consumes, manipulates and commands the senses of every living creature; even blind people stare!

''When Uma strode out on the gold and ivory stage, along with the whole of the audience, I rose instinctively to my feet. ''But she hasn't done anything yet,'' a woman near me murmured. She couldn't have been more wrong, Uma's talent has never been doubted; the powerful charismatic woman who stood before us told us at once we were in for an extraordinary evening.'' - Elizabeth Taylor (MAYSHERESTINPEACE) 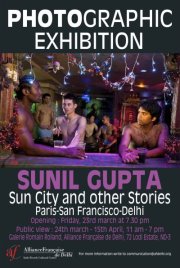 Why did this happen? On that day itself the Delhi Police said that someone had called the emergency police hotline, and complained to the Delhi Police about this exhibition which, according to the complainant, was ‘against Hindu culture’. Another version of events, also produced by the Delhi Police, claims that they received a complaint at the Tughlaq Road Police Station from someone who had made a video of the exhibition, complaining about the nudity in the photographs.

We at Nigah strongly condemn this shameful moral policing. In the recent past, there has been an alarming rise in incidents of moral policing with relation to the arts, especially in relation to queer art, and art that resists dominant visual cultural norms. In January this year, another queer artist, Balbir Krishan, was physically attacked, while his show of paintings at Rabindra Bhavan in Delhi was brutally vandalized.

Moral policing of queer lives is nothing new: charges of ‘obscenity’ have been leveled against us on things ranging from Pride marches to plays, movies and writings that allude to queerness. Homophobia hides behind these meaningless and arbitrary charges, and as queer people we are expected to be shamed into silence. At Nigah, we believe that the focus of this shaming needs to be reversed. Queer lives and desires are not shameful. Moral policing is.

Condemning all forms of moral policing, whether by individuals or by the state, we stand by the right of Sunil Gupta and other queer artists to create and display their art publicly. We further condemn institutional and state responses to this policing, which routinely fall on the side of harassing artists and their communities, instead of protecting our constitutional rights to freedom of speech, expression, assembly, association and livelihood.

At Nigah, we call for the government to condemn such policing, institutions to stand up to it, and individuals to speak out against it. And it’s in this spirit that we demand that the Delhi Police must clarify its actions by being transparent about the nature of the complaint received by them, which prompted them to forcibly shut down the exhibition on the opening night itself. Additionally, we demand that the Alliance Francaise, regarded as a liberal, queer-friendly and safe space, explain to us why they did not stand by Sunil Gupta, and why they failed in defending his right to display his work.

Lastly, we demand that the Alliance Francaise reopen the Sun City exhibition and that the Delhi Police provide security at the venue to ensure that Sunil Gupta’s right to create and display his work is not thwarted by self-proclaimed upholders of morals.

Nigah is a queer collective based in Delhi.
More about us on our blog: http://nigahdelhi.blogspot.in/

In our seventh year, we bring another evening of voices that challenge the ways in which we imagine our sexualities, genders and desires!

Open to all. Entries invited in any language.
Time slot per reader/performer: 10 mins.
To sign up to read/perform, Emailcontact@nigah.org
or Call 8527104089.
Ditto if you have questions. 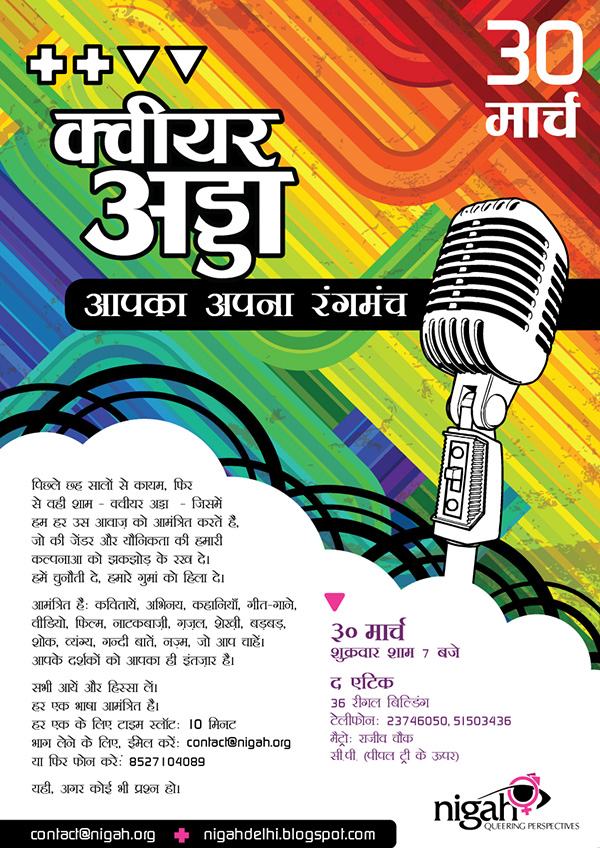 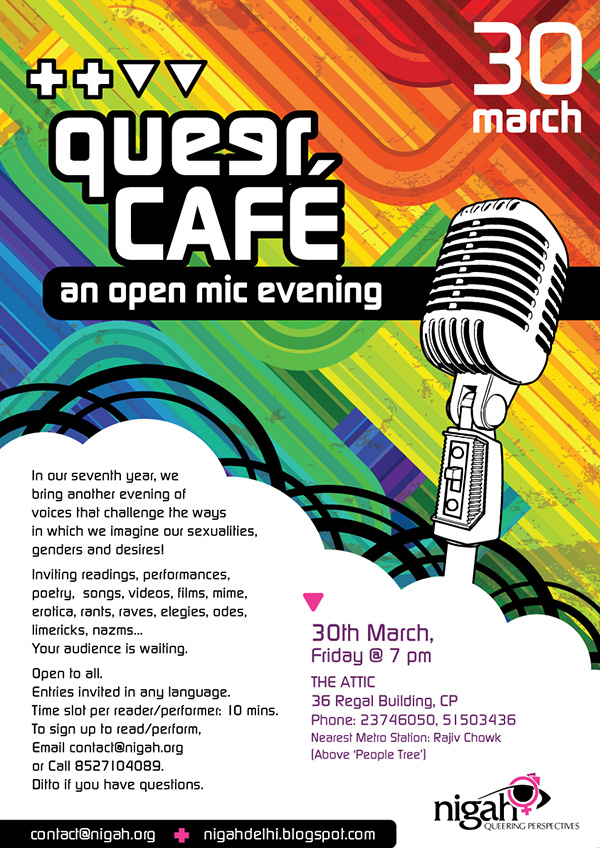